CoRR sold out its Runway for Hope 2012 on April 22nd at the Miners Foundry in Nevada City. 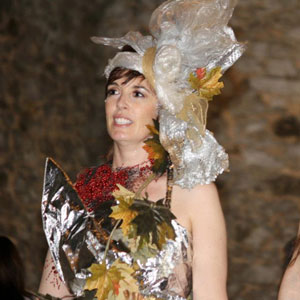 About 175 people filled the historic Stone Hall to enjoy gourmet cuisine prepared and donated by area chefs, a range of fashions featuring merchants from throughout the Sierra Nevada region, and a silent auction. CoRR, a non-profit that provides services to families experiencing chemical dependency and related behavioral health disorders, expressed gratitude for the overwhelming show of support from local restaurants, merchants, and individuals who attended.

Ariel Lovett, CoRR’s Deputy Director, told the crowd, “The people and businesses supporting CoRR and this event work hard every day providing goods and services that support our local economy . Today they’ve gone above and beyond by donating those incredible goods and services to support the health of our community.”

The Runway for Hope featured fashions from stores like The Cotton Field, Yuba Blue, Mill Street Clothing, Judi’s of Nevada City, Scotch Broom, and Abstrakt. “Almost all the models bought clothes from the stores they were modeling for” said Mora Rowe, who works for CoRR and helped organize the show. “And people kept asking ‘Where is that from? I have to have that!’ It’s awesome to promote local business while having fun and raising money.”

See you next April for Runway for Hope 2013

Enjoy photos from Runway for Hope 2012!